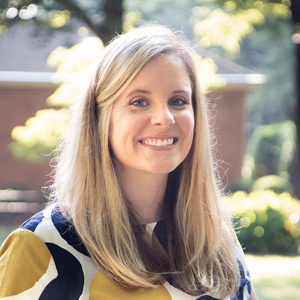 Meg Walters is a fundraiser by trade. Meg graduated with a BA in Sociology and a Masters of Arts in Management from the Babcock Graduate School of Management, both earned at Wake Forest University. She met her husband, Matt Walters, at Wake Forest and they now have 2 beautiful children, a daughter Emerson (3) and a son Owen (1). Philanthropy and non-profit work has long been Meg’s passion. Upon graduating from Wake Forest, Meg took an internship at the United Way of Forsyth County where she managed a portfolio of companies, running their in house fundraising campaigns. At the conclusion of her internship, Meg chose to move to Charlotte. She accepted a position with Big Brothers Big Sisters of Greater Charlotte, where she served as the Development Manager for 3 years. Following her time at Big Brothers Big Sisters, Meg joined the team at Novant Health Foundation, where she served as the Development Program Manager. During her almost 6 year tenure with the foundation, Meg raised an estimated $1 million annually for pediatrics and the women’s center at Novant Health Presbyterian Medical Center and Hemby Children’s Hospital. It is during this time that Meg began her journey with Claire’s Army. In her role at the Foundation, Meg managed all third party fundraising partnerships, including Claire’s Army, from its inception. From the moment Meg met the Ratliffs on the Hemby floor, she was hooked. Knowing the true impact and courageous heart that Claire’s Army employs while executing its mission, it was the first place she wanted to volunteer her time after making the decision to be a stay at home mother to her children. Meg is so excited to be able to use her skills in fundraising for a cause that fills her heart, and makes an immediate and significant impact on families fighting pediatric cancer.

Return to Board Of Directors